The Gopher football players are getting screwed.

Aside from having no charges filed against them because there was a lack of evidence, there's this:

During an 8-second clip, the woman “appears lucid, alert, somewhat playful and fully conscious; she does not appear to be objecting to anything at this time,” Wente wrote in his report. After viewing two additional videos, he wrote “the sexual contact appears entirely consensual.”

In no way am I a proponent of sexual abuse, but this girl was a whore for a night, and then couldn't take the shit-talking that came her way for being one, and tried to ruin these young men. Sad.

And on top of that, the players are facing the current suspension, and possible expulsion from the University of Minnesota because the school has a separate Ethics and Codes committee that apparently supercedes our own judicial system.

In the words of the late, great, Hall of Famer, Vince Lombardi, "What the hell is going on out there!" 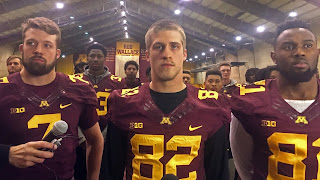