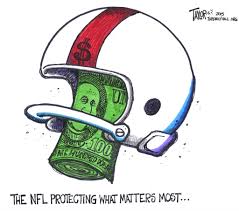 On yesterday's show, I talked about how the NFL seems to be targeted for its violence, while other sports- hockey, rugby, and boxing to name a few- have been somewhat ignored for theirs.

In football, offense has been given the green light in all aspects of football- at every level- and it's killing the sport.

No more physical cornerback play. No more decapitating the wide receivers coming across the middle. No more hitting (or touching) the quarterback. No more violence.

And for whatever reason, other sports are left alone. Hockey still has fighting. Let me repeat, hockey has in-game fights! That's preposterous, when it comes to this argument. Rugby continues to be brutal, and boxing is the best example of absolute violence- a sport I love- yet there's no talks of making it less violent.

Also, for the casual hockey fan, the fights are the same reason some watch NASCAR- for the crashes. I'm not asking to get rid of the fights [in hockey], or the scrums in rugby. I like the violence. And I think it's good for their sports, respectively. It's part of their DNA.

I'm just mad because it seems as though football has been asked to reduce the violence, while the other sports are ignored.

Obviously, concussions are a gigantic part of why the NFL has had to change its style of play. And let's be real clear and honest for a second. The only reason the NFL has changed is 100% because of litigation.

Lawsuits have that power and impact. Just ask McDonald's. They had to put specific labeling on their coffee, stating it's hot, because some idiot spilled on herself, and she sued- ending up with $3.5 million.

Now, grown men are looking for a payout through lawsuits, because of their own negligence. That is fact.

If the NFL had any sense, at all, they would tell the former players and their lawsuit to pound sand.

Football is a dangerous game. I started playing in 4th grade, and even though I didn't think of it then, it didn't take me long to figure out that football was violent.

But it was my choice to play, and I continued to do so through high school.

And I know, for sure, that I got a few concussions, yet I'm not blaming anybody because of it.

I love the game, and I loved playing the game. And I know deep down, the former NFLers who are suing the league, did too.

Unfortunately, I don't believe they realize what they are doing to the DNA of the game.

Because of them, football has had to change. And in one man's opinion, that's a shame.
Email Post