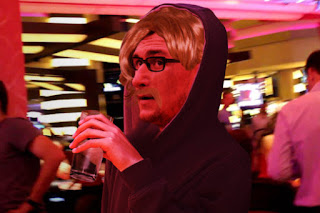 The Cleveland Browns hate their fans.

In a move that can only be heralded by 3rd graders, Manziel actually donned a blonde wig and fake mustache, and went out in public on Saturday... in Las Vegas. VEGAS! And if that's not dumb enough, on the way to the airport [that morning], he was stopped and given a traffic citation for expired plates on his '15 Nissan, which I could only hope was a Skyline.

Generally, getting dressed up incognito, and going out isn't a big deal, and really, who gives a shit if he did?  It's a little strange when it's not Halloween, but whatever.

The problem is that Johnny was supposed to be in Berea, OH, Sunday morning for his mandatory concussion treatment, and as you probably have heard by now, he missed it, along with Cleveland's game vs. Pittsburgh.

We all have friends and family who have addictions. Be it drinking, gambling, eating, etc. I deal with a hellish binge-eating addiction, and I can only tell you the place is very dark.

Some of us try to get help to overcome the addictions, and others try to beat it themselves. Johnny wants to think he's trying to "beat" alcohol. Problem is, the Cleveland Browns think Johnny has an alcohol problem, as do many other millions of people. I strongly disagree. Johnny has a "partying problem."

Johnny comes from a very wealthy family, and I can only imagine he's had his ass wiped for him his whole life. He's the kid with the messy room, because, well, "somebody else will clean it up." His traffic citation Saturday morning because of "expired license plates" screams spoiled, simply because he probably doesn't know how to renew them.

But aside from his silver-spooned misgivings, which you really can't blame him for taking advantage of, he seems to have always been the life of the party, and that's why he's acting the way he is. It's hidden as alcohol addiction, because that's what he and his friends do. In case you didn't know, partying generally involves drinking. If they partied at the chess hall, it would still bring about the same dilemma; Johnny needs the attention. He needs to feel wanted.

Johnny's problem is that he has to be where the action is, and is willing to throw away something 99.9% of the rest of us would kill for. Study the craft to become an All-Pro QB, or go to Vegas with the guys? Johnny says, "Vegas, Baby!"

It's sad, too, because I'm sure Manziel is a good kid. I have a friend who shares his dilemma, and the kid has a heart of gold. He just has to be out every night, because that's where the people are, and those people LOVE him. It's like a drug, and he can't stop using.

Manziel's also blinded by what he thinks isn't a big deal (i.e. missing a mandatory treatment for concussion, or going out with the guys instead of watching film). He's still young enough, and naive enough, to think that people will continue to keep giving him second (and third, and fourth) chances.

Eventually, the Browns, and then whoever he signs with next, will finally be done with him. Unfortunate? Maybe. But his understanding of success isn't grounded in becoming the best QB, it's about being the best at partying, and having a dark place in his mind that doesn't want the fun to stop, because he's scared of what comes next. And I'm thinking he's OK with that. After all, he's got his family money to fall back on.

I said long ago, before Cleveland drafted him last year, that Johnny would fail at the NFL level. Not because of his social life, but because I didn't think his game would translate [to the NFL]. But seeing him against the 49ers, a little against the Seahawks, and definitely during the Chiefs game, I thought I may be wrong about his NFL potential. I just don't think he can shed his inner Joe Nameth for all of us to find out.

And for Cleveland fans, the change can't come soon enough.