Deja Vu (and not the good kind) 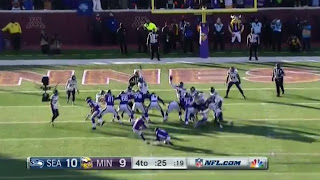 The picture alone makes me want to shoot something.

I've been told many times to "let it flow, then let it go", but after 7 hours of not being able to let the Vikings loss to the Seahawks go, I feel like like blogging about their defeat is the only way to truly "let it go."

The culprits are obvious. Blair Walsh missing the inexplicable 27-yard FG to win the game. And Adrian Peterson, fumbling (3rd fumble lost in 5 post-season games) the football away ('09 NFC Championship anyone?), in what gave the Seahawks a chance to kick the go-ahead FG, and then blaming himself for the loss. Together, they were able to hand the out-played Seahawks a playoff win in what appeared to be a miserable setting (-6 degrees below with a windchill of -25).

Yet the question to so many Vikings fans is always "Why us?"

4 Super Bowls losses, 4 NFC Championship defeats ('87, '98, 41-0 & '09), Darrin Nelson' drop, Gary Anderson's game-sealing FG miss, 12 men in the huddle, Drew Pearson's "Push-off" Hail Mary, Favre's interception, & Antonio Freeman picking the pass off Chris Dishman's back are just a handful of tear-your-heart-out moments in the illustrious history of the Minnesota Vikings. There's so many more that I can't even remember, or maybe I just don't want to try, but either way, you get the picture. For whatever reason, the Vikings have been cursed as bad as any franchise in pro sports. And yes, that includes the Cubs.

Yes, I realize it's just a game, and just like every other disaster the Vikings can cause, I'll be fine. You have to wonder, though, why it is the Vikings, and basically every other Minnesota sports team (minus the Lynx) has a dark cloud hanging over? In the iconic words of Vince Lombardi, "What the hell is going on out there!?"

If I had to guess as to why, I'd say it's because Minnesotans, when it comes to their sports teams, always expect the worst and hope for the best. It's seriously the only thing I can come up with. Ask any of them, and they'll tell you they're not ready to crown a victory until the final horn/whistle blows. And because of this, games like today happen. I truly believe it's gotten to the point of karma with the Minnesota fanbase.

I know that sounds ridiculous, but there's no other explanation I can think of. Instead of going into games expecting to win, we expect to lose, while hoping for a win. Seriously, listen to sports-talk radio in Minneapolis/St. Paul, and you tell me what the vibe is. It's definitely not an air of confidence.  It's more wishful, and it's understandable, too, after getting kicked in the balls for the last 54 years. The guy at the bar today, a Seahawks fan, said he expects to win every game. I'm sure the Patriots fans feel the same. That's how we felt in '98.

And maybe that in itself is why this game, albeit hurting a lot right now, will dissipate a lot faster than '98 or '09 did. The expectation of those two teams were Super Bowl, whereas this squad wasn't pegged to be Super Bowl contenders. Nonetheless, it hurts like a son-of-a-bitch. If nothing else, just the way they lost. I mean, 27 Goddamn yards! Are you fucking kidding me?! Seriously, it's just stupid.

They might not have had the same expectations, but to lose like this, in true Vikings style, is what hurts, and in turn begs the question, "Why us?"